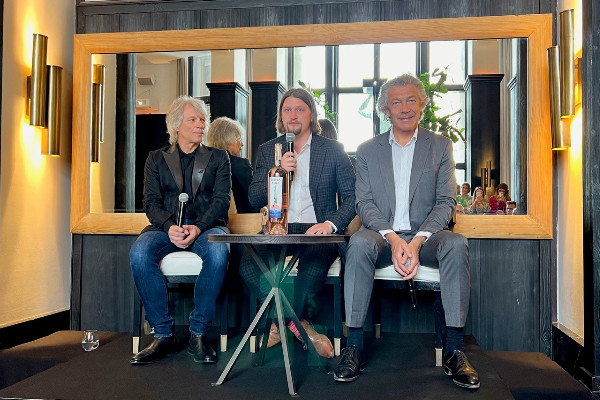 Born from the meeting between the musician and the Languedoc operator, the premium rosé Hampton Water is approaching its fifth vintage and announcing its distribution in the European market.

u Trocadéro, overlooking the Eiffel Tower, at the opening of rosé cuvée Hampton Water in Europe on May 9. Rock star Jon Bon Jovi is a Languedoc AOP co-branded since 2018 by his son Jesse Bongiovi and Frenchman Gérard Bertrand. Second, he explains that this partnership is a first for him: “I always develop my own wines. I was fascinated by their idea of ​​“lifestyle” wine and their plan to start a family business. I didn’t want to make a famous wine.”

The idea for Hampton Water rosé was born in the hyper-chic beach resort of East Hampton, New Jersey, two hours from New York, where, according to legend, we drink more pink wine than water. Jon Bon Jovi, his fan “pink juice” He was jokingly called and teased by his then-student son, Jesse. “Hampton Waters” Dad’s favorite drink. He turned this joke into a professional project, including the blue water diving figure on the label.

Gérard Bertrand is a great partner and teacher

The rest was through Southern Glazer’s Wine & Spirits, Gérard Bertrand’s American distributor. The Americans came to Languedoc and worked on the harvest, tasting and blending it with Gérard Bertrand, according to Jesse Bongiovi. “a great partner and mentor”.

The wine is a blend of Cinsault and Mourvèdre (Jesse Bongiovi’s favourite) and Mediterranean grape varieties based on Grenache aged in French oak barrels. Created in 2018, Hampton Water is currently available in 50 countries and will surpass the symbolic bar of one million bottles sold by 2022. The co-branded tub sold by Monoprix in France appears in Carrefour hypermarkets and supermarkets (€16), as well as the CHR C10 and Tribouillet network.