Peter Stämpfli, the artist who only paints tires: “I’m misunderstood” 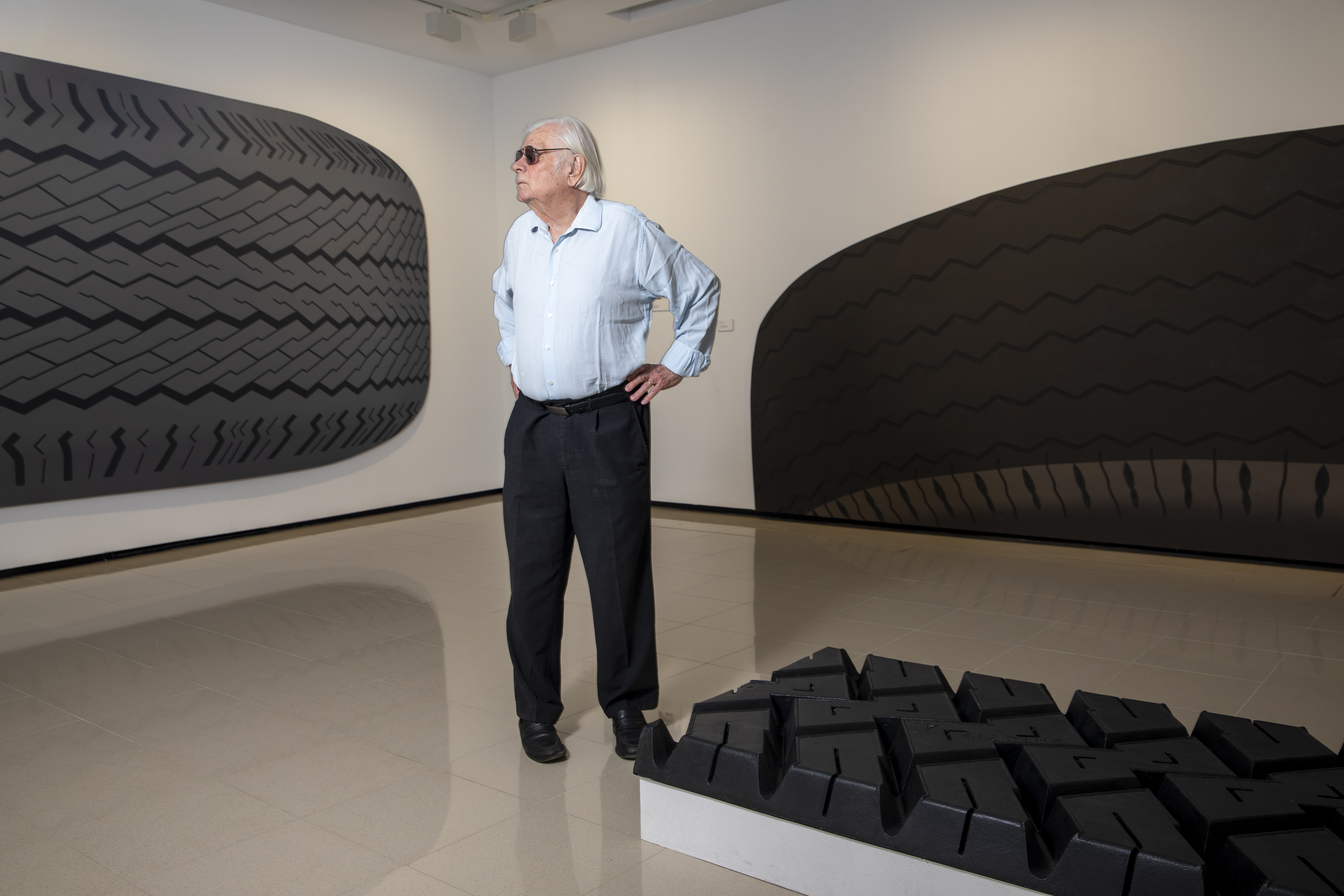 “I don’t remember how many years I’ve been and don’t talk to me about yourself,” snaps Peter Stämpfli, who walks through the rooms of his Sitges foundation like someone turning the pages of an autobiography, which amounts to the same thing. In fact, the Swiss artist (84 years old), who lives between Paris and Catalonia, is one of the few living legends of the golden age of pop art and, at the same time, an open book for a generation of artists, many of them they personal friends, who changed the course of Art History.

A meal with Roy Liechtenstein. A paella with Eduardo Arroyo in Paris. A deep friendship with James Rosenquist and even closer with the ‘pope’ Jacques Villeglé, who died weeks before Magazine’s meeting with Stämpfli whom everyone calls Peter for its long relationship with the town of Garraf.

In the rooms, and exceptionally, only the work of the reinventor of the wheel hangs, since the artist has dedicated himself to reinterpreting the tire for decades in all shapes and colors. A review of the permanent collection is added to the temporary exhibition Mon exhibition with more recent works, pneumatic variations in acid colors.

“It is the reality of my world, I am the only one who has dedicated his entire career to an object. Karel Appel made a wheel, Liechtenstein another… in some galleries they told me ‘we already have a wheel’ and I answered: ‘Okay, but it’s not mine’”, he laughs. Stämpfli never goes out of style. What’s more, he is furiously current not only because of his two shows at the foundation but also because of his exhibition at his Parisian gallery, the prestigious George Philippe & Natalie Vallois, entitled Fast and Furious.

Stämpfli knew Roy Lichtenstein well. “One day we had lunch in New York, on Long Island, and we discovered that, in the early sixties, the two of us had painted a washing machine a year apart and without knowing it, of course, because at that time we did not know our respective work, there was no contact between European pop artists and those from the United States,” he recalls.

The artist looks back and smiles at the thought that for many years critics were never on his side or given him the benefit of the doubt for his work: “They said: ‘This washing machine is not art, it’s propaganda.’ And I replied that no, that it was anti-propaganda, a postcard from our environment. Caillebotte also painted everyday life in the 19th century and was criticized… Sometimes -he reflects- it is better to be misunderstood, one who belongs to the hall of refused”.

“At the beginning of the sixties you couldn’t travel like now, my influences are in English pop art with David Hockney, Allen Jones, Peter Blake (all alive) and Hamilton. I met the Americans a little later when the woman from Leo Castelli, Ileanna Schapira, opened a gallery and presented the work of Lichtenstein, Jasper Johns, Rauschenberg and Warhol. I treated some of them personally. I met Lichtenstein in New York. I also knew Rosenqvist very well. Arroyo was a close friend, he cooked paella for everyone and argued with Ana, my wife. He was from Madrid and she was Catalan (laughs).”

The walk through the Foundation begins in the sixties, when Stämpfli is a young man who goes to Paris and by chance, and for 50 francs, stays in a 180 m2 studio, no less than in the mythical Bateau-Lavoir, where they had study, among many others, Picasso, Gris, Van Dongen or Modigliani.

“When I started, all the works were of a lyrical abstraction and few were interested in the object or photography. Only the English had another look. For my part, I got bad reviews, they didn’t understand me, they didn’t understand painting from photos”. Stämpli recalls that, for example, Rosenquist’s painting was narrative, while his has no story, no gesture, no background: “There’s nothing to hold on to.”

Some of the paintings that hang on the walls were miraculously saved from a fire that reduced to ashes more than a hundred works, documentation, slides… “It was February 10, 1990 in my studio in La Villette. There are fabrics that were saved because they were on their way to an exhibition or in a warehouse. But I had three samples at the time and I had to do 25 frames from memory.”

In 1967, Stämpfli began to paint details of his car, a Citroën 2CV. “I was interested in geometry, which became abstraction without narration. It was then –he remembers- when I abandoned photography as a model and went on to drawing”. Over time, the pieces would be oversized to reach six meters.

The temporary exhibition at the Sitges foundation closes with some pieces that never reached their destination. This is the case of the previous studies for the Cordeliers stained glass windows, which is the name of the abbey of Châteauroux (France). “They were never done, the mayor changed and there was no longer a budget.” And the visit ends in the warehouse where some 130 works by 66 artists are stacked, donations from friends and colleagues such as Arroyo, Villeglé, Tom Carr or Carlos Cruz Díez. “I had to convince them all,” he laughs.

At Magazine we are confessed lovers of pop art artists and creators who have crossed their limits and not only those of the canvas. To accompany Peter Stämpli’s reflections, here are some articles dedicated to his friends and contemporaries such as Arroyo or Hockney, plus extra content with artists such as Yoshitomo Nara who rewrite pop art with oriental innocence.