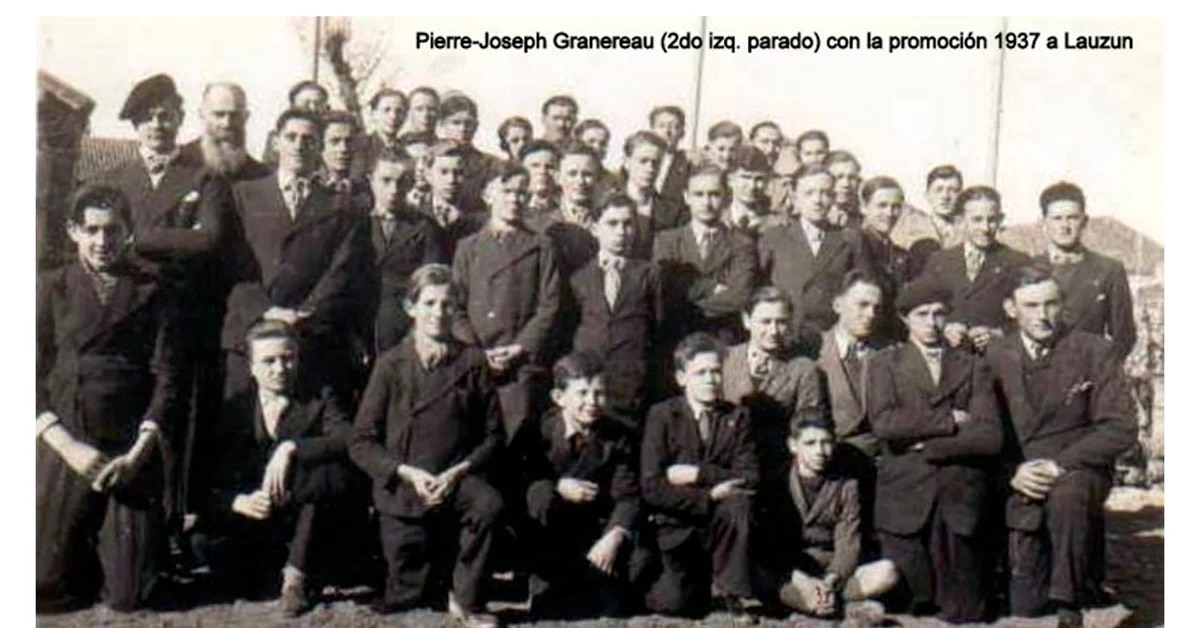 Self-taught and strong-willed, his superiors called him the “free electron”, his alternative pedagogy spread all over the world, including Argentina. A book about his work has yet to be translated into Spanish.

Priest Pierre-Joseph Granereau, creator of alternative pedagogy, a method of rural education in and out of the countryside

Pierre-Joseph Granereau, a little-known militant of the peasant cause It is the name of the newly translated book from French about the creator of the alternation pedagogy.

This incredible system of rural education, which will soon emerge in France, has been installed in almost every corner of South America, from the Andes to the Pampas, from the jungle region to the Altiplano. Countries such as Colombia, Ecuador, Peru, Brazil, Paraguay and Uruguay, among others, benefited from its arrival. And of course, Argentina, He was one of the first to promote it.

Oscar Dinova, retired rural teacher a teacher at CEPT (Total Production Training Centers) in Buenos Aires province. Translate the book that traces the life of the creator of the system into Spanish and publish it in our country. in this conversation with information, explains how he came into contact with this pedagogy, Contribution to the spread of this method in Argentina in the 90s and how the pandemic and quarantine gave him time to study Granereau’s life and work, which gave rise to the idea of ​​translation.

Oscar Dinova, translator and editor of the book about Granereau

— How did you come across this educational experience?

– When I returned from exile in France in 1985, I had every expectation to be able to involve myself in a social or educational project. I went back to my country with some of the European education I was able to do. Unfortunately, my bachelor’s degree was not valid unless I got a revalidation. I did precarious jobs for three years, until i found the beginning CEPT Program Buenos Aires Province, Rural schools, based on alternation pedagogy – combining a term in school and a term in family ownership – . It was 1988, and with the great efforts of all the actors involved, a real success Considering that they meet a felt need; rural and rural education without being uprooted.

– Is this what you were looking for?

– Not possible! Apart from making sense of our transformation, This system, which is based on teacher-student coexistence in the centers, responsible working in groups, the formation of integrated knowledge areas and active family participation, I was born exactly where I lived in exile for 8 years . It was 1988, and I quickly began to peruse all the available bibliographies in the French language, which are plentiful and very detailed. Later, I learned of the active participation in the creation of a priest named Pierre-Joseph Granereau and a handful of rural leaders. believes in a fantastic utopia, Creating secondary education for the countryside in the 1930s in southwestern France.

– How did everything go?

— While taking my first steps as a teacher at the Total Production Training Center in San Andrés de Giles, I was presenting my Argentine thesis to renew my undergraduate degree at the University of Luján on “Alternative Schools, One Life”. Fortunately, the “Project” was very well received by my teacher and the examination table. It was to go back to the historical predecessors of the French. a pedagogy that uses the rural environment as a learning scenario, close relationship between theory and practice, parents taking responsibility for their children’s future, identification of the community with the school, etc. It has been a real privilege to be able to access this long road, which has been covered by various institutions, pedagogues or simply conscious people for over 150 years. Like Granereau, they prioritized common sense, popular access to information, and extensive use of available resources over rigid forms. like unused buildings, among many other things. This was my first approach to the life of Reverend Granereau, with so much to explore but so little time.

— How was the system implemented in Argentina?

— Following the course of the French schools that spawned it, the system expanded into the interior of Argentina. I added the following to my teaching task The supporter of the system is in the Ministry of National Education. Their establishment is not only in the Province of Buenos Aires, but also Corrientes, Chaco and Jujuy. It was during the 90’s. Several alternative schools were created in these provinces with strong community involvement. One of the tools used was the broadcast. My thesis by the Ministry of National Education and Culture, free nationwide distribution that I gave to the ministry. Even today it remains a reference for teachers who want to start working in alternative programs, as there is not much bibliographic material in Spanish.

– You said there was a lot to investigate…

– More! In the 1930s, when the world was going through an unprecedented crisis, I was fascinated by the idea of ​​learning more about the life of a person who got pregnant. brilliant idea of ​​a system by and for peasants . But at the same time, with them. How did he reach that bright spark that started it all at the age of 50? Where the idea was nurtured to mature were some of the questions. In my experience as a militant in the ’70s, I learned to prioritize the contributions of creative individuals who are the invaluable value of a life, As long as it protects it, it can replace thousands of others. Moreover, with a true philosophy of inclusion, the work of all beneficiaries, the field of tolerance and democratic decision-making. It was Granereau.

— How did you deepen your knowledge of the experience and its creator?

– I was lucky enough to have access to your autobiography, Le Livre de Lauzun (Lauzun’s Book, edited in French), a fascinating self-published publication from 1969 that traces a unique life. Born into a farming family in a small town in southwestern France in 1885, he later became a priest, as it was the starting point for many of the country boys at the time. The anointed district priest would not be able to hold him back from the ultimate goal of his life; children in rural areas receive a quality education without leaving their surroundings.

Recently published pamphlet on Granereau and his method

— How did the idea to translate this book come about?

— As I said, his autobiography opened me up to his whole life. So incredibly I started to give speeches about this brilliant pedagogue of life in educational institutions including CEPT. without any title, he did not even manage to pass the baccalaureate, but on the one hand, he sensed the needs of the French peasant family, and at the same time who, Many years have been prepared for when the opportunity presents itself. It was a long process of maturation and searching for possible means for families to see the proposal as viable and for the State to recognize them later on.

— Was the pandemic the opportunity presented to you?

– I think so too. During the pandemic, with the help of networks, I had time to read and research the Granereau family further. so it wasI found a book written by a great-nephew of the high priest. Gilles Granereau, who together with Marie Claude Bernard, a genealogist, presents us with the immigrant origins of the Granereau family’s ancestors, and Patrick Gués, a leading expert on alternation and a member of the French Maisons Familiales -Family Houses, critically examine the main aspects of the Creator’s life. Studying Gallic alternation schools. The real luck was in personally contacting his grandson, Gilles, who graciously allowed the work to be translated and disseminated. Pierre-Joseph Granereau, an unknown militant of the peasant cause, Published in France by the Société de Borda for the dissemination of the Sciences, Literatures and Arts of the Aquitaine region.

— Is this your first translation job?

– Yes, it allowed me to first and alternately benefit from knowledge and knowledge of the French language. It was a very interesting experience. In translation, one manages to enter unsuspected levels of identity. I was also able to reach a synthesis about this real human being with his creation. benefited many rural families it has no other aim than to massify education all over the world. A true revolutionary. And a fascinating character. ghost In his personal profile, he combined the farmer, the theologian, rural union activist, and educator. Getting to know its people, business and traditions, having an outstanding cultural background, being a member of a rural association for the promotion of the environment and also being the first alternative teacher, director, producer of study guides, supporter of creation new schools and articulators between the French State, Church and Congregation. All in the context of the start of the Second World War and the Nazi occupation of his country.

– Don’t even say it. Iron and an unclassifiable personality, the maker of an overwhelming mystery. In fact, his Agen-based religious authority described him as: “free electron” . indomitable. Extraordinary character. As the world goes through one of its most brutal and devastating historical experiences, this field priest He laid the foundations for a pedagogy that began in a modest chapel in Serignac-Peboudou in 1935 and today has about 500 centers in France. existence of schools and associations on all continents, thousands of students, research and documentation centres. we can say that He not only bet on the future, he built it.

– Then do you recommend this book?

– Definitely. They are pages to enjoy and ponder over. In addition, there are photos from the family archive, which are a real delight, such as the photo of the priest with his first four young disciples. A source of pride for those involved in this pedagogy, and an invitation to get to know it for others, why not? to spread. There is no doubt that there will always be ears ready to listen to this proposal and to build together the path that opened almost 90 years ago.

– What other projects do you have?

— One of them is to turn the notebook, Lauzun’s Book, his complete autobiography. But this is the first step. We will have a good experience with this book, and then we will try to present in Spanish the life of Granereau, who wrote himself in the 1960s.

How will those who want to read get the book? Pierre-Joseph Granereau, a little-known militant of the peasant cause ?

— The book was edited by me at a printing house in my home town of Mercedes. The only purpose is to spread it. It is delivered with cost price + cargo. You can contact me via social networks: Oscar Alberto Dinova (Facebook/Messenger). Also by email: [email protected]

- Advertisement -
Share
Facebook
Twitter
Pinterest
WhatsApp
Linkedin
ReddIt
Tumblr
Telegram
Mix
VK
Digg
Previous articleTo arrange that the world is coming to an end
Next articleFall 2022 trends: discover the must-have color for the start of the school year… a pop shade that gives you a healthy glow – X Gossip