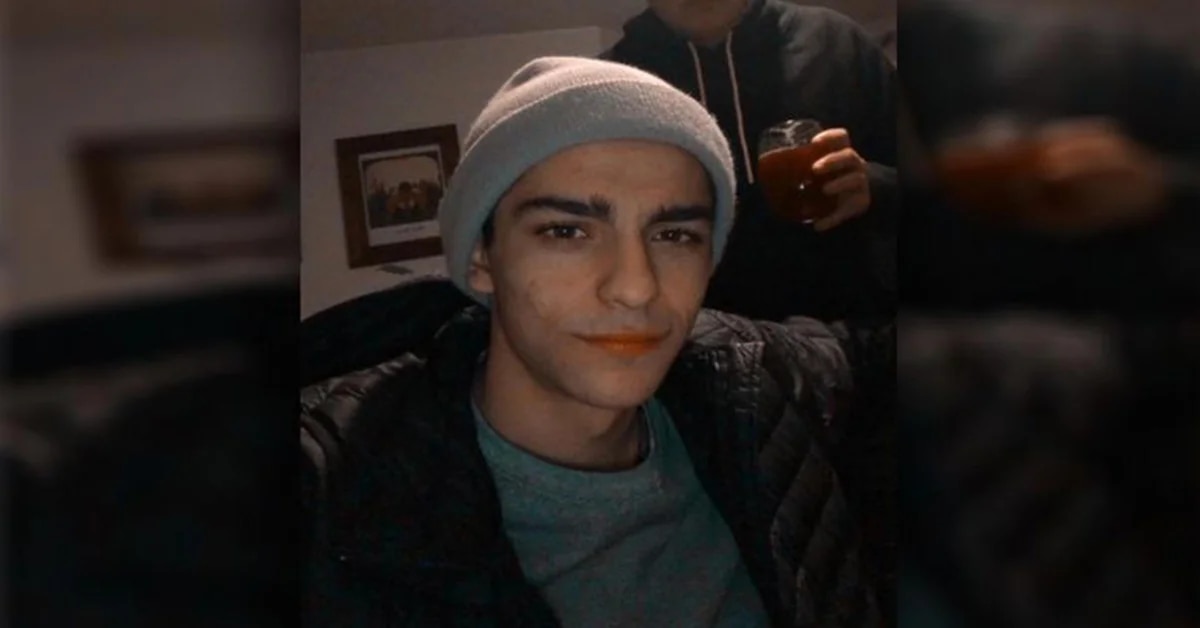 On August 6, 2020, the 17-year-old was shot in the back while traveling in a car with four of his friends in Córdoba. There are two officers accused of killing him and 11 with cover-ups and lies. The trial begins on Sept.

Blas Correas was 17 when a bullet from Córdoba police killed her on August 6, 2020.

Exactly two years ago, early in the morning like today, but in 2020 a group Cordoba police finished his shaping the plan is unsuccessful, clumsy and frightening destined to cover up the crime committed by one of them against Blas Correas A 17-year-old boy who returned home after having dinner with his friends and was killed by a bullet in his back.

In a month, on September 7, 13 cops arrested , two directly for murder and the rest will sit on the podium to plant a weapon and cover up the disaster, and they will give an account of what they did to Justice and the Correas family: a series of inexplicable events that began just moments after midnight that day.

police officers Javier Catriel Alarcon Y Lucas Damian Gomez could go to jail as co-authors Blaise’s murder and trying to kill four other friends Traveling in a Fiat Argo with all the sincerity of one’s first youthful nights on the boat.

“Blas showed that it can happen to anyone” said a year ago information Correas’ mother, Soledad Laciar, is a pioneer of the struggle for Justice, which has mobilized and mobilized thousands of people in this state, whose only political victim is Commissioner Gustavo Piva, Director General of Security for the city of Córdoba. The young man belonged to a working middle-class family. The police bullet that took his life is symbolic of how badly a security force can work in the context of impunity, especially against vulnerable populations. This was not the case with children whose families immediately managed to mobilize their neighbors and spread their incident in the media.

The zero point of the tragedy, the moment that probably changed the course of events and Correas’s fate, occurred just moments before the deadly bullet was fired. The boys returned a few blocks before they ate and were shot. quarreled with two men on motorcycles .

There are 13 policemen involved, two charged with murder, others charged with cover-up and perjury: one policewoman confessed to planting a gun

The driver of the Fiat Argo wanted to make a U-turn, did not see them, and motorcyclists blamed him. They had a short argument and insulted each other. Seconds later, due to unexpected braking, the motorcycle from behind tried to flee and was thrown, unable to determine whether it was by accident or kicked by the motorcyclist (depending on the wording), right rear view mirror flying off.

The Fiat Argo didn’t know, but the motorcyclists warned two cops a few meters ahead of a car making dangerous maneuvers. This turned into a radio alarm. What could have been a routine check with a wake-up call ended in disaster and death. It is not clear whether it is clumsiness or malicious intent.

According to the investigating prosecutor, José Mana, Police set the alarm as robbery . “The Fiat Argo QTN is faster than the control of channel eight here, you know, just so they can take into account Oscar mobiles? six saws (subjects in police jargon) they come in, they wanted to do something here ”, one of the cops was inexplicably alerted by radio frequency.

Meanwhile, the carriage, which had four children, of course unarmed, continued on its way. 18-year-old Juan Cruz Camerano Echavarría was driving. And he was accompanied by four children under the age of 17, including Blas, who was among his friends. they called it “bone” . At the intersection of Vélez Sarsfield and Romagosa streets, in the Colinas de Vélez Sarsfied district of the Cordovan capital, a police checkpoint awaited them, already aware of a suspected white Fiat.

Agents Gómez and Alarcón were standing on the asphalt facing traffic. It was the beginning of the end.

“After the incident where my mirror was kicked on the motorcycle, we continued towards the centre, Av. . As the Fiat driver approaches investigators, I can clearly and safely see two policemen standing.” He explained that he was approaching control in the right lane: “The first thing I did was slow down, I put it on the third, I dropped it on the second and When I pass by the cell phone and the police, I see him raise his gun and point it at my head. ”.

When he lifted the gun and pointed it at me, I freaked out and sped up. After I passed the police, I heard voices, First I heard it like a dry sound, when the gun was fired and a sheet metal sound , followed by a click of another shot and the sound of glass breaking. There I turned my neck back and saw the crystallized window. Also, I noticed that the car was speeding up and skidding on me, and then I realized they were pulling a rubber band,” Camerano Echavarría told investigators.

CT, one of the girls in the car, told prosecutor Mana of the surprise of the youth as Juan Cruz escaped from the police amid the gunfire. Until at one point they heard Blas say to them: “Take me to a hospital.”

“I realized they had drawn their guns when we passed” told about another of the young people whose identities have been protected since the events took place. And he followed: “I didn’t hear a loud sound. joyful I immediately felt a gunshot and it was like a wind that “scrambled” my head. . It hit the glass of the rear window. Two or three seconds later I heard six or seven more shots in a row. When the shooting is over Hueso told me ‘they shot me'” , told another friend of Correas’s, who admitted that he crouched and “rolled like a ball” when he saw one of the cops pointing at them. A taxi driver behind the Fiat confirmed to Justice that he saw one of the cops holding the gun at the checkpoint.

According to subsequent investigations, the prosecutor was able to determine that Alarcón was the policeman holding the gun and that Gómez was with him. It was determined that the first fired two shots and the second four shots. Five of them crashed into the vehicle in which the children were traveling. And it was learned that the bullet that killed Blas came from Gómez’s gun.

Sergio Alejandro González, Wanda Micaela Esquivel, Yamila Florencia Martínez, Walter Eduardo Soria, Enzo Gustavo Quiroga and Jorge Ariel Galleguillo is evaluated as the “perpetrators of the crime of covering personal interests” and the seriousness of the act, which is aggravated by the prosecutor investigating the case by being a police officer. Plus Leonardo Alejandro Martínez, Rodrigo Emanuel Toloza, Ezequiel Agustín Vélez, Leandro Alexis Quevedo and Juan Antonio Gatica They should respond as authors of perjury crimes and different types of cover-up crimes to hinder further investigation.

Quevedo and Vélez are agents who encounter motorcyclists. Both testified under oath that someone had told them they “wanted to rob me on my behalf” from the Fiat men. But for the prosecutor, both the rider of this motorcycle and his friend “fundamentally denied this while making affidavits.”

Esquivel, 33, was the one who smashed and detonated the lying building constructed by at least nine of the 13 police officers. And he admitted that he was the one who planted the gun in justice. at a nearby roundabout, so the murder by Gómez and Alarcón had a motive. And he didn’t radio that Blas was dead and that the bullet came out of his comrades’ weapons without giving any reason.

Minutes to 1 in the morning, he’s with Alarcón They placed a partially filed Doberman .22-caliber gun a few blocks from the crime scene. . And half an hour later, as confirmed, he, accompanied by the police duo, accused Alarcón, simulated “everyday” exploration of a rake and gun . Prosecutor Mana summed up his request for trial as “a clear ploy to confuse jurisdiction and favor the defendants Gómez and Alarcón.”

The policewoman broke the pact of silence that the entire group of agents made and they all repeated the same fake version; this must indicate that there were witnesses who saw how the boys threw the gun at that place. Witnesses seem obvious to clarify, they never showed up because they were an invention. However, the prosecutor ordered expert witness against all young residents of Fiat without a criminal record. Dermotest examination showed no gunpowder residue in any of them.

“The death of Blas Correas and the attempted assassination of Juan Cruz Camerano Echavarría, CT, MN and CBC were the result of the wrongful actions of the defendants Gómez and Alarcón. ”, the prosecutor wrote, raising it to trial.

If it has been proven that the bullet that killed Blas was the bullet fired by Gómez, why does the prosecutor attribute the murder to Alarcón as well? In the file he explained it this way: “After the start of the -murderable-gun attack by the accused Gómez, the accused Alarcón participated in it -almost simultaneously-, in this way, tacitly, implicitly, his intervention, with the same killing intent as him. Both did what the other did. In addition to tacitly accepting it without opposition, it also exhibited similar behavior to the victims.

The inspector also managed to confirm this. Deputy Commissioner Alejandro González Having a seniority of 21 years, was the key to cover up . “The defendants Gómez and Alarcón escaping investigation while facilitating the alteration of evidence and traces of criminal investigation.”

According to research, The deputy commissioner gave the gun to Esquivel to install. It had taken him up to two hours to report the incidents to his superiors and where he had appeared to locate the crime scene in a way that would best serve the complex police. It’s about the crime committed by the Buenos Aires City police brigade against football player Lucas González in the Barracas neighborhood.

The scale of impunity does not end there. Two commissioners, Galleguillo and Soria, and deputy commissioner Quiroga helped solidify the lie, the little story that the group of 13 agents (at least) was trying to construct about Blas and his friends being guilty.

According to the prosecutor, these three authorities “did not notify the competent authority in a timely manner of the possible criminal act committed by the defendants Gómez and Alarcón, despite being legally required to do so.” and they failed to report the event via radio frequency, which is mandatory for members of the force.

They jostle to embody Madonna