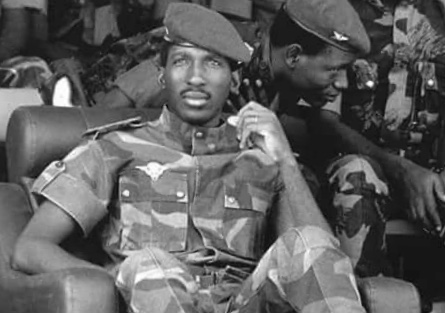 Thirty-five years after his death, Thomas Sankara continues to be admired and quoted when he reigned for only four years (1983-1987). Why did it remain in the hearts of Africans? What is its popularity?

Were there any areas where he stood out from other African heads of state? Why do African youth have the same admiration for Patrice Lumumba as they do for him?
Thomas Sankara was born on December 21, 1949 in Yako, a country still called Upper Volta. His father is a Fulani and his mother is a moaga (singular of “mossi”). He alternates with Ouezzin Coulibaly High School in Bobo-Dioulasso.

and the Ouagadougou Military Prytaneum. Later, at the same time as Blaise Compaoré, he took advantage of officer training at the Arms Military School (EMIA) in Yaoundé (Cameroon), then at the Antsirabe Military Academy (Madagascar). The 1972 Madagascar revolution, which overthrew the Philibert Tsiranana regime, preceded it. The following year he returned to Upper Volta with the rank of lieutenant.

Assigned to the training of young recruits, he stood out by bringing to military training an education about the rights and duties of a citizen, because for him “without patriotic political education, a soldier is only a potential criminal.” In 1974, a conflict broke out between Mali and Upper Volta.

Sankara is shown positively during this conflict. After the “war of the poor”, he read a lot and came into contact with the extreme left militants. In 1976 he became the commander of the National Commando Training Center in Pô. That same year, he and Compaoré went on a hardening course in Morocco. Two men create the Communist Officers Regroup (ROC). Henri Zongo, Boukary Kabore and Jean-Baptiste Boukary Lingani will be part of the ROC.

In November 1980 the army seized power, but very quickly the new regime fell into the trap of the regime it overthrew (trade union suppression and financial scandals). In September 1981, the immensely popular Sankara was appointed Minister of State for Information in the government of Colonel Saye Zerbo. He resigned a few months later to denounce the abolition of the right to strike. In fact, on April 21, 1982, he warned those who silenced the public. It immediately deteriorates and is removed from the capital.

On November 7, 1982, Saye Zerbo was overthrown. Military doctor Jean-Baptiste Ouédraogo came to power not because the coup was made for him, but because Sankara withdrew at the last moment. In January 1983, Sankara was appointed Prime Minister of the People’s Liberation Council (CSP). He wants to break the neo-colonial relationship connecting Upper Volta to France without delay and promises to bury imperialism.

In April 1983, he invited Libyan Muammar Gaddafi to Ougadougou. He was removed from his post on May 17 and placed under house arrest. However, in the face of public demonstrations supported by left parties and unions, the authorities are forced to release him. On August 4, 1983, the Pô garrison landed at Ouagadougou.

He is applauded by a cheering crowd. Thomas Sankara, who was appointed head of the National Revolutionary Council, formed a government with the African Independence Party (PAI) and the Union of Communist Struggles Reconstructed (ULC-R). But what does he plan to do with power?

“To reject survival, to relieve pressures, to save our countryside from medieval inactivity or decline, to democratize our society, to open minds to a universe of collective responsibility to dare to invent the future. “To overthrow and rebuild the administration over the image of another officer, to bring our army into the people with efficient work,” he said. On August 4, 1984, the country changed its name: Upper Volta was renamed Burkina Faso (two words moré and dioula, meaning “homeland of honest men”).

He delegates the powers of traditional chiefs to Committees for the Defense of the Revolution (CDR), inspired by the Cuban experience and responsible for using force locally on behalf of the people. The CDRs will unfortunately go to extremes that will be condemned by Sankara. The regime is violating human rights by executing 7 people involved in the failed May 28 coup.

In the assets of the government’s balance sheet, the villagers’ construction of water tanks, civil servants wearing traditional clothes (faso from fani), dowry prohibition, forced marriage and cutting, the last bad tree felling, lowering of operating costs, one year’s free rent, “beggars, helping us reflexes that put in our minds. ” the refusal of food aid and the cessation of imports of fruit and vegetables. French economic aid was reduced by 80% between 1983 and 1985.

In 1986 the country was able to provide every citizen with two meals a day and ten liters of water, which earned Sankara the praise of the United Nations Special Rapporteur on the right to food when he said: “He defeated hunger, Burkina became self-sufficient in four years.” For example, Thomas Sankara lives modestly by traveling in a Renault 5, traveling little and earning a small salary.

At the international level, he denounces the injustices of globalization, the financial system that has enriched the few, and the heaviness of the debt of Southern countries, a debt whose legitimacy it challenged in 1987 in Addis Ababa and referred to countries as Africans. not pay back. Sankara described himself as an anti-imperialist.

When François Mitterrand arrived in Burkina Faso in November 1986, he publicly denounced him for receiving South African Prime Minister Pieter Botha and UNITA leader Jonas Savimbi in blood from head to foot”. It cooperates closely with Cuba, where in September 1986, after vocational training, Burkina sent 600 young people to participate in its development.

It condemns the US support to Israel and South Africa, the US occupation of Grenada, calls for the end of the veto right granted to the great powers, and speaks in favor of Western Sahara, Palestine, Palestine. Nicaraguan Sandinistas and the ANC.
From then on, France, through the socialist Guy Penne and several African regimes close to Paris, worked to overthrow him. Compaoré and Sankara talk to each other less and less. Distrust begins to settle between the two brothers and friends.

On October 15, 1987, Sankara was killed. According to the testimony of Alouna Traoré, the only survivor, Thomas Sankara, leaving the room where he met with the other 12, said to his cabinet members: “Don’t move, I’m the one they need.” Thirteen days before the tragedy, he declared: “Our revolution is only behind us, to our side. and when we look ahead, it will be valuable if we can say that the Burkinabès are a little happier thanks to him.

To bring this happiness that Compaoré made him pass from life to death? During his undisputed 27-year reign, did the former dictator make his compatriots happy people? However, we may doubt this when we know that the same citizens overthrew him from power in October 2014. In ‘Jeune Afrique’ of 30 May 1989, Compaoré speculates that Thomas Sankara had betrayed the August 1983 revolution and that he himself had come to power. No pity for the traitors, Sankara’s family and the people of Burkina Faso recently apologized. Does Ouaga’s former dictator express sincere remorse or is he a ruse to escape a life sentence and return to power? One thing is certain:

On October 15, 1987, Africa lost a hero, a leader who knew how to combine words with action (see Bruno Jaffré, ‘Thomas Sankara, la liberté contre le destin’, Paris, Syllepse, 2017), leaving a lasting mark in the history of his country and continent. , a true revolutionary, persuasive and persuasive Pan-Africanist. Sankara was all that, but above all he was brother, comrade and paraclete (lawyer) of the humiliated and disadvantaged.

“Our path has been traced and recorded under the eye of a person who has an AirTag”: Maïra denounces a “spying technique”