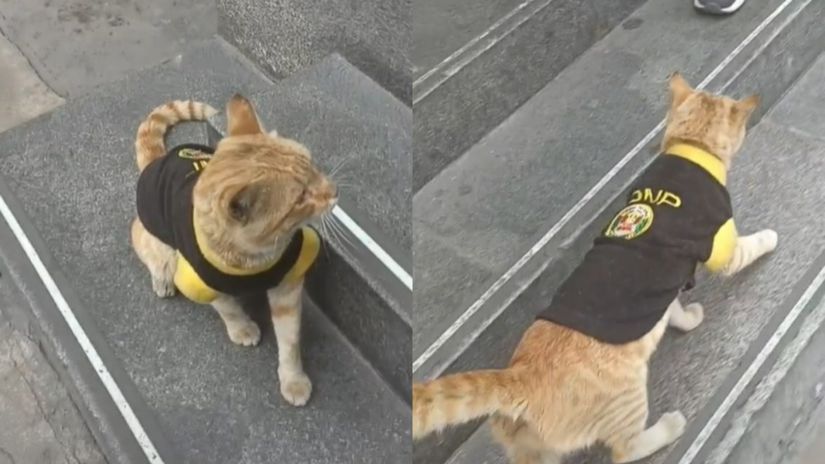 More and more companies and institutions rely on the presence of animals to carry out their work: be it a taxi driver’s companion dog or a cat that pampers children who go to the eye doctor to get new glasses.

The last one has been the Supreme Court of Lima that has opted for a police cat to guard the entrance of the place. This has been demonstrated by the lawyer and tiktoker @sarai.rr who was extremely surprised to see the uniformed animal at the entrance of the facilities.

The cat with caramel-colored fur was sitting on the steps of the entrance, but it was evident that it was not a stray animal, unlike any other, it was uniformed just like the police officers who guarded the place.

Not only that, the animal, in addition to wearing dark clothing with the logo, also bore the acronym of the National Police of Peru (PNP). An image that the woman did not hesitate to immortalize approaching him and caressing him to share it on social networks.

“With you the Terna cat, ha ha ha,” he pointed out in the description of the video while adding that “The police cat does not exist… he is super affectionate.” A scene that has not taken long to go viral with hundreds of thousands of visits and all kinds of reactions to it.

“The police are respected”, “I have realized that street cats are more affectionate than those at home. When my cat wants to be petted”, “How nice, I hope they take good care of him” or “He even went to the police and I didn’t”, have been some of the most popular comments by users.

It is unknown who has uniformed the cat

Despite the viralization of the video, it is still unknown how the cat ended up in a police uniform: if it was the institution itself that disguised it for its recurring visits to the building or if it was a joker who wanted to play a prank on everyone those who enter the Supreme Court.

Liane Foly talks about her rhinoplasty in 1997