The revolution of change 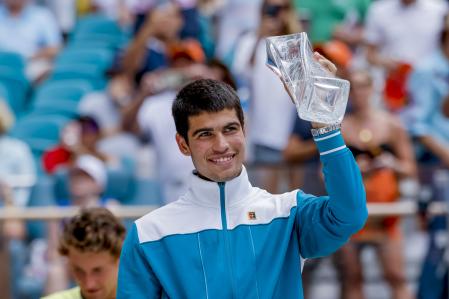 It was difficult to think that Rafa Nadal could have a relief. The bet of replacing Iniesta dressed as a Blaugrana was not easy either. But on Sunday two young and admired guys were in charge of staging the revolution of change in tennis and in Barça.

Carlos Alcaraz (18 years old) is today unofficially the third man in world tennis after Djokovic and Nadal. “He has no holes”, comments the tennis wise man from Sports world Angel Rigueira. He is a player with extraordinary quality. Surely with more tennis at that age than his main rivals, but also with a head capable of sustaining pressure.

Pedri González (19 years old) was chosen by the media as the best Barça player last season. He won the Golden Boy, the title of the best young footballer in the world, and the Koppa Trophy, the best player under 21 years of age. He exploited his football with the bet of Koeman, who gave him the alternative in the first team and was about to win the League in his first year dressed as a Blaugrana. In the second, his name is already chanted at the Camp Nou.

Alcaraz will be the great attraction of the Godó tennis tournament after Nadal was in the last decade. The player from Murcia is both future and present, and the player from Manacor is the best Spanish athlete of recent times. “I see myself winning a Grand Slam this year,” Alcaraz declared after his brilliant triumph in Miami. And it is that now the tennis players look at the table to see which side Alcaraz is on.

Pedri has two works of art in the form of goals, against Galatasaray and against Sevilla, both decisive, with even execution and plenty of quality. “We are all the leaders”, declared the Blaugrana player after his impressive goal against the Andalusians. “We just have to see how we run”, added the Canarian, who at the end of the game merged into a hug with his compatriot Pedro, who also triumphed at FC Barcelona.

They both belong to the same generation of young explosives with a lot of quality and a perfectly adjusted head to withstand the pressure. They are not the children of irreverence but they have known how to occupy a space that projects them into the future like the cracks that are already there. You don’t have to make them. They have the natural characteristics of the greats. Alcaraz opens an unthinkable stage in tennis when the relief of the mythical trilogy seemed led by Medvedev or Thiem, and Pedri takes over from the great Iniesta in a Barça with airs of change. There is always someone who presses behind and wants to eat the world. The only one who, at the moment, does not have a replacement is Leo Messi. It was said that he would end up playing Xavi and it was Xavi who ended up playing Messi, from the bench.

Emmanuel Macron: all about the president’s new armored car