DIRECT. Covid-19: WHO deplores a “very worrying” rate of transmission in Europe 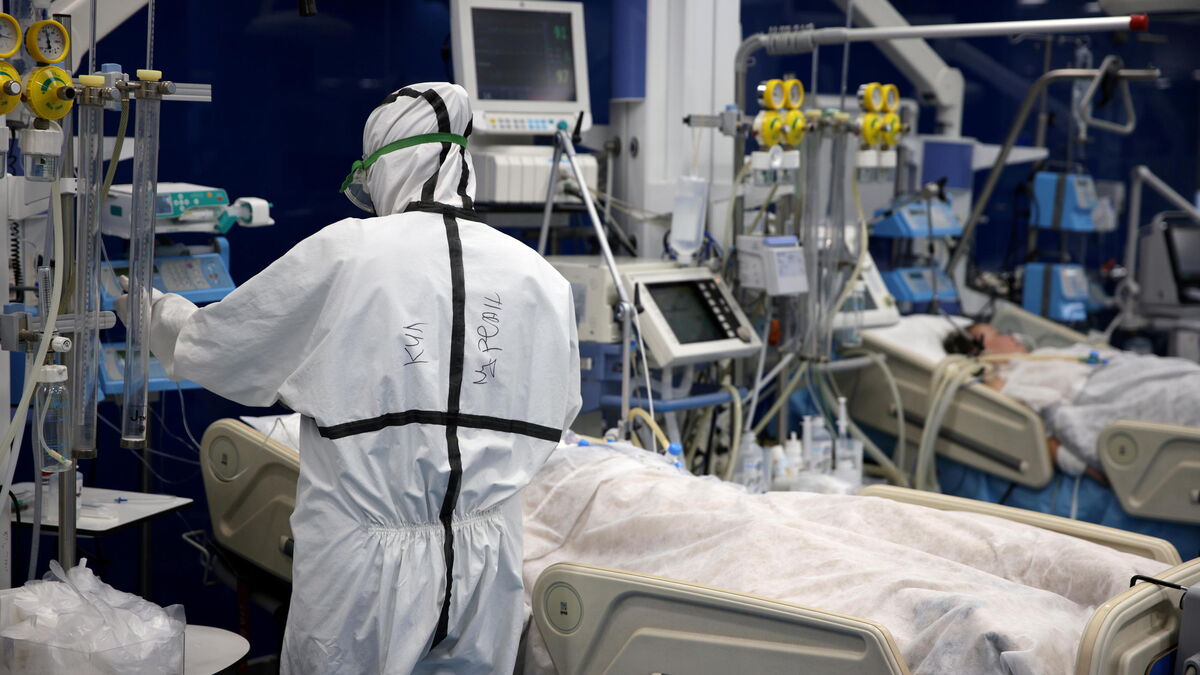 > The events of the day:

12 hours. The Covid did not worsen poverty in 2020 as feared. The Covid-19 crisis did not cause an explosion in the number of poor people feared by associations in 2020, INSEE said on Wednesday on the basis of provisional estimates. The French Institute of Statistics concedes, however, that “certain situations of poverty” may have “worsened”.

Last year, the monetary poverty rate “would” have remained stable at 14.6% of the population, the same rate as in 2019, said the public institute for statistical studies. As for income inequalities, they would also “remain unchanged”. These are preliminary estimates, carried out by “micro-simulations”. The real poverty rate for 2020 will not be calculated until 2022, based on fiscal and social data concerning the vast majority of the population.

11h35. « PfizerGate ». The occurrences of this keyword have been numerous since Wednesday, provided by the “antivax” sphere with reference to revelations from the British Medical Journal (BJM) published on Tuesday. What are the irregularities in question and should they alert? We take stock in this article.

11:10 am. The WHO is concerned about the risk of half a million more deaths from Covid-19 in Europe by February.

10:50 a.m. The RSA paid to suspended caregivers: law, nothing but law. This is what argued this Thursday on BFMTV the deputy (LREM) of Yvelines Aurore Bergé against the presidents of departmental councils who refuse to pay the RSA to caregivers suspended because not vaccinated. These socialist presidents refuse to apply this solidarity income paid by the taxpayer and ask the state to assume its suspension decisions by paying itself an income to these caregivers.

Aurore Bergé recognizes a “legitimate” question raised by the fifteen presidents of departmental councils, but believes that the latter must however apply “a rule of law”. “It is not the departmental councils that choose to whom the RSA applies. We are not going to have a different policy depending on the department in which we live, ”replied the elected representative.

10:35 am. Record of daily infections in Germany. The German health authority warns this Monday on a record of new daily cases detected across the Rhine.

The number of those reported to the RKI #CoronaCases in 🇩🇪lag yesterday at 33,949.

➡️ highest daily value since the start of the pandemic:

➡️ also higher than the previous record of December 18, when 33,777 cases were reached@world pic.twitter.com/SWtb6Dc330

10:20 am. “The word wave is too strong. ” For Alain Fischer, the “Mister vaccine” of the government, the health situation deserves vigilance, but not alarmism. Interviewed on FranceInfo this Thursday, he recognizes “a change in weather favorable to the virus” but considers the increase in cases too “moderate” to speak of a new wave. “We are very far from a saturation of hospitals,” he says.

10:05 am. Mussels and fries involved in the Creuse? In the Creuse, the incidence rate exceeds 100, or even 200 for people over 65. According to the Regional Health Agency, cited by France Bleu, the cause of this increase is to be sought in clusters linked to tea dances, pétanque competitions and mussels and chips evenings.

9.40 a.m. New death record in Russia. Russia once again sets a new daily death record due to Covid-19, reports the Tass agency in particular. The latest assessment in 24 hours shows 1,195 deaths in this country where the population is generally reluctant to vaccination. The previous record dated from Wednesday with 1,189 dead.

9 hours. Over 240,000 fewer tests last week. The Directorate of Research, Studies, Evaluation and Statistics (DREES) announces that 240,000 fewer tests were performed last week, between October 25 and 31, compared to the previous week. This decrease concerns in particular 160,000 PCR tests carried out less in the school environment because of the holidays. A total of 2,055,100 PCR and antigen tests were performed. Since March 1, 2020, more than 163.7 million tests have been carried out in France.

8:50 am. Retailleau’s annoyance. Asked about franceinfo, Bruno Retailleau, boss of senators LR, annoyed the attitude of the government and the President of the Republic who want to extend the use of the health pass until July 31, 2022. “The government wants to step over the presidential election” which will take place in April 2022. Conversely, Bruno Retailleau, did not want to leave “for more than eight months without controlling the executive. The government has never been denied the means to protect the French. But in a democracy, the counterpart to exceptional powers is increased control of parliament, ”he said, taking up an argument developed earlier this week in Le Parisien.

“Parliament has never been so controlled. “Emmanuel Macron” wants to do without the control of parliament “. He refuses a “permanent control company.” In 10 years, we will still have the pass? He asks himself. “I think we’re going too far. The past is no small thing. “

8:25 am. New record of contaminations in Ukraine. The number of contaminations in Ukraine reaches a new peak. The latest report shows 27,377 new cases. With 720 deaths on Wednesday, Ukraine was among the three countries in the world with the most deaths in 24 hours. Less than 20% of the population are fully vaccinated, reluctance to vaccination being strong in the country.

7:20 a.m. The return of the wind in question. The bise is making its return more and more in France. Benjamin Davido, infectious disease specialist at Raymond-Poincaré hospital in Garches (Hauts-de-Seine) provides an update for Le Parisien on the possible risks generated by this gesture vis-à-vis the Covid-19. In the workplace, many employees do not regret the disappearance of the wind in a professional setting.

7 hours. CO2 emissions at pre-pandemic level. The Covid-19 crisis was only a parenthesis for the climate. Global emissions of CO2, the main greenhouse gas, have picked up again, leaving less and less time to counter global warming, a study warns. They should rebound 4.9% in 2021 to be closer to less than 1% of the absolute record of 2019, according to this study by the Global carbon project. This group of international scientists studies global carbon “budgets”, or the amount of CO2 that can be emitted for a given result. More information in this article.

6:50 a.m. Political campaign in quarantine in Chile. Six of the seven presidential candidates on November 21 in Chile must suspend their campaign to undergo a one-week quarantine. The first-round favorite tested positive shortly after debating face-to-face with each of them.

6:40 am. Decline on the vaccine obligation of caregivers in Canada. Quebec and Ontario, the two Canadian provinces most affected by the pandemic, announced on Wednesday that they would not ultimately suspend their workers not vaccinated against Covid-19 in the medical field to avoid weakening an already battered sector . They will not receive a “Covid bonus” and will have to undergo a screening test three times a week, otherwise they will be suspended. Vaccination will nevertheless be compulsory for new employees. 97% of people working in health have received at least one dose of the vaccine.

6.30 a.m. The US Central Bank is reducing its support. The US Central Bank on Wednesday launched the reduction in monetary support it has provided to the economy since the start of the crisis, noting that activity and employment “continued to strengthen”. She also highlighted “high” inflation. The US Federal Reserve (Fed) will start slowing down its asset purchases in November. From 120 billion dollars per month currently (about 104 billion euros), they will be reduced by 15 billion each month (about 13 billion euros), until they are reduced to zero. These injections of liquidity into the financial system made it possible to prevent a financial crisis from superimposing on the economic crisis linked to Covid-19.

6:10 am. Health pass restored until July 31. The deputies decided overnight, in accordance with the will of the government, to extend until July 31, 2022, the possibility of using the health pass to fight against Covid-19, reversing the decision of the Senate to reduce this period to February 28. After this new reading, the senators must in turn again work on the text during the day. The National Assembly must have the last word tomorrow during a final reading.

A mixed joint committee (CMP) Senate / Assembly met on Tuesday to try to reach a compromise ended in failure. The senators, like the oppositions of the right and the left, denounce a “blank check” given to the government over a period which “spans” the presidential and legislative elections. The Minister of Health, Olivier Véran, assured that this date allowed to have “readability and visibility” on the progression of the virus “which continues to circulate” and the means to fight against. More information in this article.

6 hours. Hello. Welcome to this live dedicated to the Covid-19 pandemic.