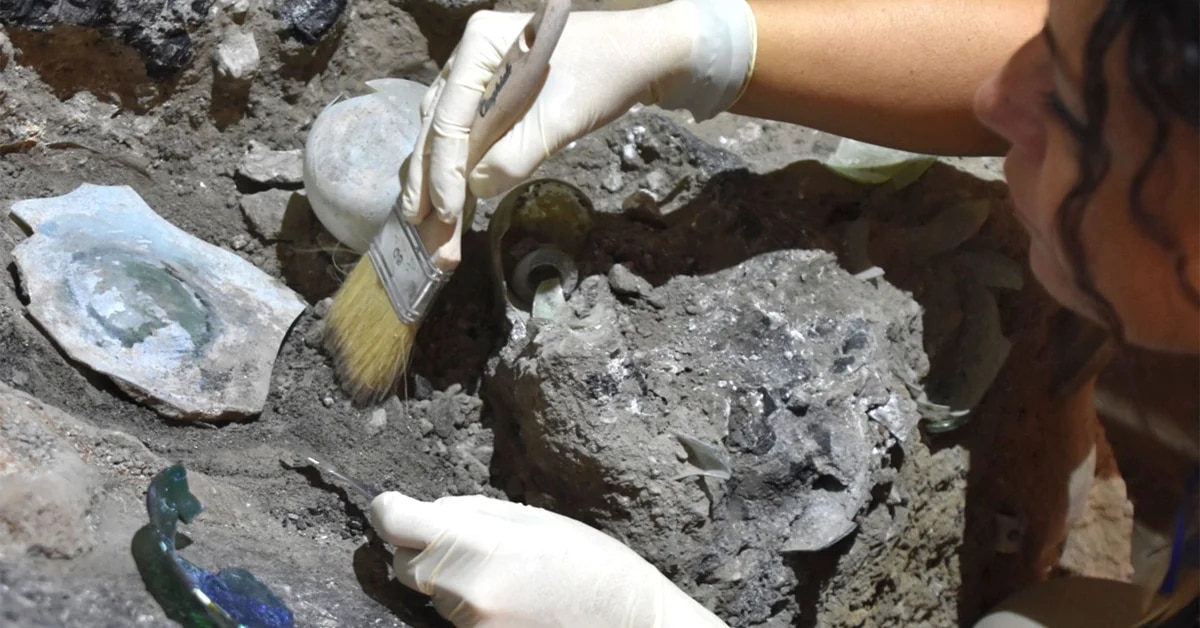 The discovery consisted of a two-meter-high cabinet with five shelves, containing everyday objects such as glasses, plates, pottery, pots and amphorae.

archaeological site Pompeii (Southern Italy) never ceases to amaze, and today announced the discovery of several “middle-class” apartments with cabinets filled with objects since the explosion that devastated the city two thousand years ago.

Gabriel Zuchtriegel, director of the archaeological park, said in a statement: The discovery of these furnished rooms informs about the middle and lower classes of Pompeii, “the majority of its population but underrepresented in the sources”.

The excavation revolves around what is known as Lararium House A luxurious sanctuary that was lit up in 2018, and experts entered four of its contained rooms from street level, two on the first floor and two on the ground floor.

Archaeologists of the Roman city of Pompeii, buried by the eruption of Vesuvius in 79 AD, excavate a series of apartments typical of this city’s “middle class”, where they find several cabinets and chests filled with everyday objects. other types of furniture, such as plates and glasses, as well as a table or a simple bed. EFE/Pompeii Archaeological Park
- Advertisement -

They met inside Lots of furniture and objects showing the life of the “middle class” of Pompeia at the moment when it all came to an end, when Mount Vesuvius erupted in 79 AD and buried this Roman colony for almost two thousand years.

In one of the plain and earth-floored rooms, perhaps the cellar, A five-shelf and two-meter-high cabinet appeared, in which everyday items such as glasses, plates, ceramics, small vessels and amphorae were kept.

The cabin is where it was at the time of the explosion and was partially broken as the weight of the pyroplastic material caused the roof of the house to collapse.

The discovery of these furnished rooms informs about the middle and lower classes of Pompeii, “the majority of its population but underrepresented in the sources”. EFE/Pompeii Archaeological Park

Experts will continue to investigate what is gradually hiding on its lower shelves to protect the ash.

In a small room with no decorations on the walls, you can see a simple bed with some of its pillows, a tripod with glass on top, and an open chest, believed to have been emptied by its owner. in time to escape from the fire.

The bed type is the same as that found in the slave room of the villa last year.”Civita Giuluana ”, free from any decoration, removable and without mattress, only with rope net.

Found inside the trunksmall ceramic plate and oil lamp used for food with a bas-relief in which the god Zeus is represented by turning into an eagle.

In another of the first-floor rooms, another cupboard with plates and glasses for domestic use, a bronze sink and a “perfume burner” or “perfumery” in excellent condition were found.

“In the Roman Empire there was a large segment of the population (…) who fought for their social status, a class vulnerable in political crises and famines but ambitious when it came to social escalation” Zuchtriegel explained.

In one of the rooms, with a plain and beaten earth floor, perhaps a cellar, was a two-meter-high cupboard with five shelves, containing everyday items such as glasses, plates, pottery, small vessels, and amphorae. EFE/Pompeii Archaeological Park

Therefore, it is assumed that the residents of Casa del Larario lived with the same ambition for prosperity, because while some rooms were decorated and had some valuables, others had “overly plain” wooden furniture.

“We don’t know the residents, but the entertainment culture that definitely inspired the wonderful decoration of the patio represents a future they dream of rather than a lived reality,” said the site’s manager.

Culture Minister Dario Franceschini congratulated the news: “Pompeii never ceases to amaze and is a beautiful recovery story, proof that research and innovation achieve extraordinary results if Italy works as a team and invests in young people” .

Guest – Europe must do more for Artsakh