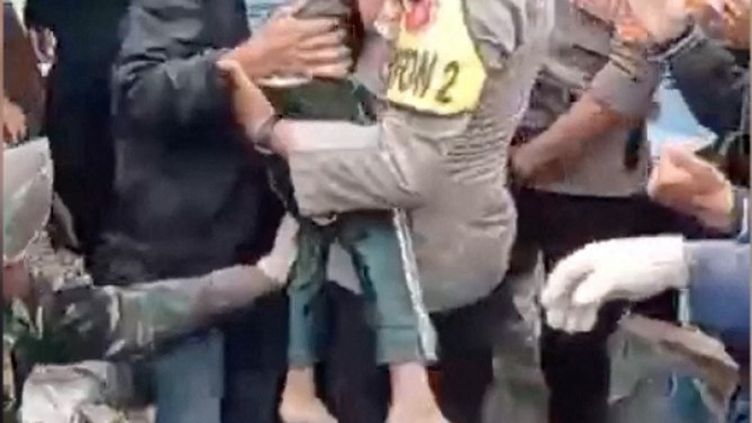 The rescue was filmed Wednesday night, reigniting hopes of pulling other survivors out of the quake-induced ruins.

Miracle of Indonesia. His 6-year-old boy Azka was rescued from the rubble on Wednesday Nov. 23 after an earthquake that killed at least 271 people. The rescue has revived hopes of lifting other survivors from the ruins caused by an earthquake that struck around the town of Cianjur, west of Java, Indonesia on Monday. “When we found out Azuka was alive, everyone started crying, including me.”volunteer rescuer Jexen Kolib told AFP.he mentioned “miracle”.

He was found next to his grandmother’s corpse, “On the left side of the house, on the bed.”‘ said the rescuer. “He was protected by pillows and had a 10 cm space between him and the concrete wall. he detailedIt was a very narrow, dark and hot place and not much air could come in through the openings. ” “I didn’t expect him to be alive after 48 hours, otherwise he would have worked harder the night before.” To find him, he regretted.

According to data from the Disaster Management Agency (BNPB), more than a third of the victims of this earthquake were children who were at school or at home when the quake struck. “Today, 6,000 rescuers were dispatched. It’s raining, but we’re still searching.”BNPB Secretary Suharyanto said: The latest death toll released by authorities on Wednesday night was 271 dead, 40 missing and more than 2,000 injured.

In this video released by the District Administration of Bogor, West Java, a lifeguard with a big smile holds a boy in a T-shirt and blue pants in his arms while another lifeguard runs behind and holds the child’s hand. ing.

Young Azka is then filmed sipping a drink through a straw while rescue workers stroke his hair.

Local media reported that he was saved thanks to a wall that withstood the quake and prevented another from collapsing on top of him.

However, rain and aftershocks delay the search, leaving no time to find more survivors.

Those wonderful lunatics rolling in their funny machines